The KM3NeT Open Science System seamlessly integrates with the computing environment of the KM3NeT Collaboration, providing data, software and documentation to all relevant parts of the scientific analysis workflow. 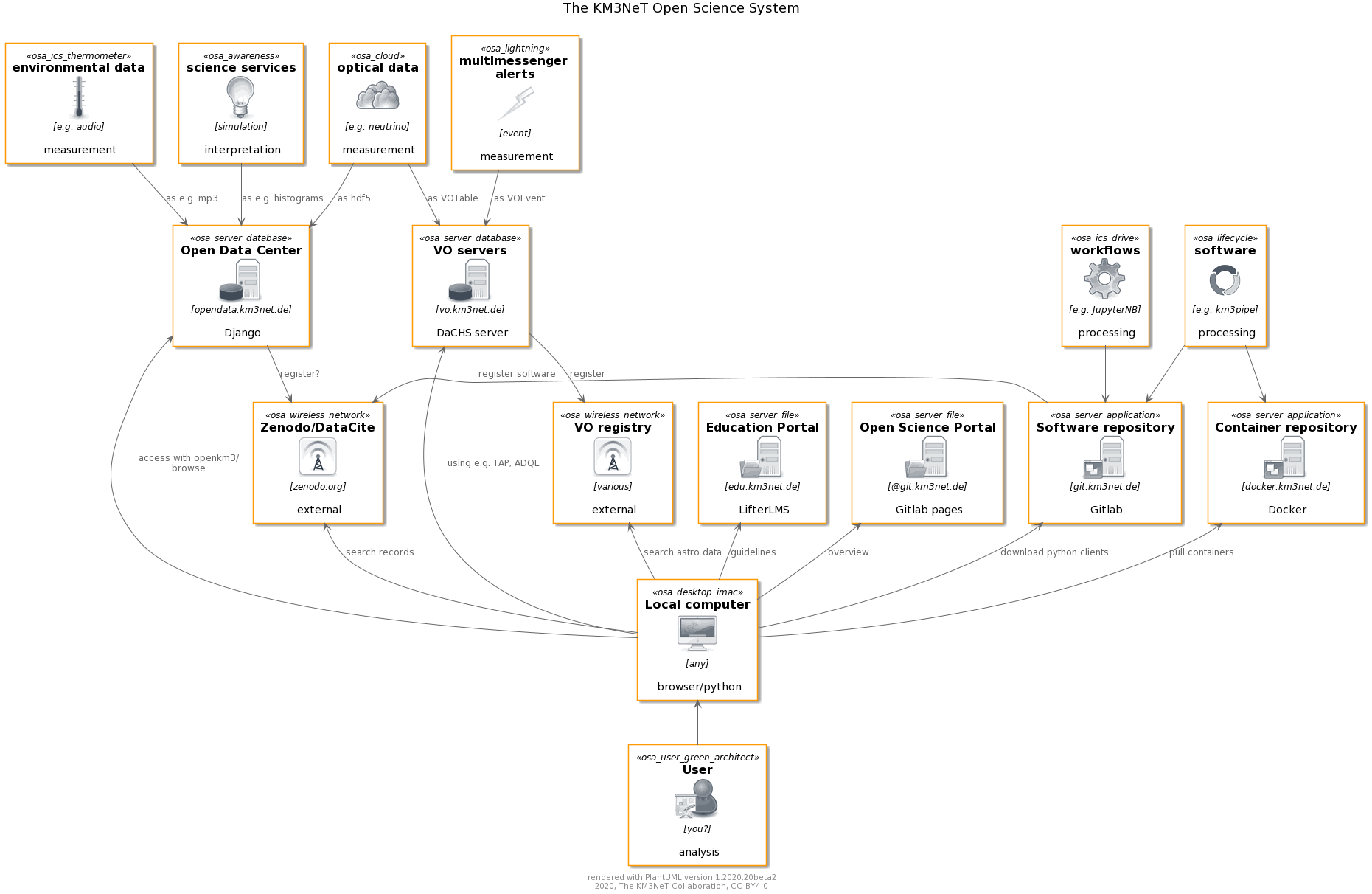 The products offered from the various servers include not only data, but also software and supplementary material.

Only high-level data sets and derivatives are offered in the open science platforms. These include:

For the evaluation of the significance of the data for a given analysis target, additional information crucial to the interpretation of the data is published. These include:

Software and workflow examples facilitate the processing of the open data and form the basis for community-oriented developments. Offered products are:

Documentation is set up to provide a linear step-by-step approach to the use of KM3NeT data as well as broad documenation on the specific details for user-oriented specific information, namely

The products are published through various platforms tailored specifically to the requirements for sharing of the specific product.

Documentation is widely spread through the system and generally offered as closely as possible to the actual product. Dedicated platforms offering centralized knowledge access are

For the end user, various access options to data, software and documentation are offered.

Data is registered to large centralized data registries which make the KM3NeT data findable by the wider community. These registries include

The platforms themselves offer various options to acces the data, namely

Clients for user-friendly handling of the data are offered by third parties as well as by KM3NeT, including

One of the primary goals of ANTARES is the identification of astrophysical neutrino sources, whose signature would appear as clusters of events at given coordinates in the sky. The ANTARES data used for this search are therefore a set of reconstructed neutrino arrival directions (in equatorial coordinates: right ascension RA, declination dec). The significance of a neutrino excess from a given sky position must be assessed over the expected background fluctuations using, for instance the Feldman-Cousins statistics Phys.Rev.D57:3873-3889,1998. The background is represented by atmospheric neutrinos: neutrinos originating from cosmic ray interactions in the Earth’s atmosphere. Their arrival directions are isotropically distributed over the Earth’s atmosphere, and result, at the ANTARES detector, uniform in right ascension and with a distribution in declination that depends on the detector geographical position (latitude).

This use case is using ANTARES data and allows to inspect a sample of neutrino arrival directions in equatorial coordinates (RA, dec), evaluate the expected background rate for a user-selected sky position, and finally assess the significance of a cluster defined as all arrival directions that fall inside a given radius, selected by the user and indicated here ‘region of interest’ (RoI).

The background is evaluated in a declination band whose width is equal to the RoI diameter. The observed signal-like events are those falling inside the RoI. Feldman and Cousins statistics is applied to determine the significance of this observation accounting for the fluctuations expected in the background. The aim of the analysis is set an upper limit, at a given confidence level, on the presence of a source at a given sky position.

Here follows the step-by-step description of the code provided as Jupyter notebook.

ANTARES data has already been published to the VO for two data sets by using the services of the German Astrophysical Virtual Observatory (GAVO) which run the DaCHS software. The most recent public data sample of the 2007-2017 point source search is available through the ANTARES website, however, it is not findable through the VO and does therefore not match the FAIR criteria. Including ANTARES data in the development of future VO data types allowes to increase the chance for a long-term availability of high-quality ANTARES data. On the other hand, the KM3NeT VO server could be registered to the VO and protocols could be tested using the ANTARES 2007-2017 sample.

The provided KM3NeT use case contains a dataset with triggered events reconstructed with 4 Detection Units of KM3NeT/ORCA. It is therefore dominated by atmospheric muon events (several Hz, compared to atmospheric neutrino rate of ~mHz) reaching the detector from above. The recorded and reconstructed dataset is provided on the KM3NeT VO server [1] in hdf5 format for download. This is used for analysis with jupyter notebooks.

For the online sample the recorded ORCA runs are pre-selected by imposing requirements on variables stored in the database:

For the demonstration, a range of data-taking runs meeting the run selection criteria above is published on the KM3NeT VO server [1].

The dataset was processed from the Collaboration analysis format aanet to hdf5 format, and enriched with metadata describing the provenance and contents of the file.

Jupyter notebooks are based on python3 and require mostly packages installable via pip.

Description of KM3NeT/ORCA use cases

The jupyter notebooks for the KM3NeT use case are available under [2].

The dataset provided [1] contains reconstructed events. While the reconstruction parameters provided at the moment are in-sufficient to produce a pure atmospheric or even astrophysical neutrino sample, the general procedure can be motivated unitl in future, single or few-parameter high-level event selection variables are available for a genuine neutrino analysis.

With this precondition, four analysis examples are provided as KM3NeT use-case:

The educational material of the KM3NeT collaboration is provided through the Virtual Education Centre. While the first prototype was based on an indico service, this was found no sufficient for the aims of a virtual education centre during user tests. There was, e.g., no video streaming service and no feedback mechanism available. The new Virtual Education Centre consists of a server running the Wordpress content management system. The LifterLMS plugin has been installed in Wordpress, providing a specialized education management system.

The courses in the Virtual Education Centre are divided in two categories. They are either protected or freely available. The courses belonging to the first category are accessible exclusively by KM3NeT members, who are able to enrol by authenticating with their KM3NeT user identity, later on the link to federated authentication and authorisation services from the EOSC are foreseen. These courses are oriented mainly to newcomers making their first steps in the collaboration. The courses of the second category are openly and freely accessible by all users, containing information on how to use the open data provided by the collaboration and aimed to provide an introduction to scientific research with the KM3NeT detectors.